HB Waves is a youth basketball organization intended to serve players of all ages and skill levels. Through the many club and training programs that our organization has to offer, your child will have the opportunity to develop fundamental basketball skills that are necessary to become a successful high school athlete.

HB Waves participants frequently move on to successful high school careers where the fundamental base developed in our programs provides a foundation to help them excel among their peers.

Additionally, HB Waves considers the consistent demonstration of good sportsmanship, teamwork and a positive attitude, as well as an overall commitment to excellence, to be pillars of our organization and not merely lip service.

Our organization offers a variety of year-round training programs focused on the instruction of proper decision making in gamelike situations, individual offensive and defensive skill development, as well as the overall development of personal strength, speed, and agility. We take tremendous pride in what we offer, which have consistently proven to be some of the very best training programs in Southern California.

HB Waves is dedicated to the preparation of our young athletes’ ability to compete at the highest level by teaching fundamental offensive and defensive skills that are integral to properly transitioning to the high school Varsity and collegiate levels. Our staff is committed to the philosophy of “as you practice, so shall you play.” Presently, practices are held at the MAP sports facility in Garden Grove. 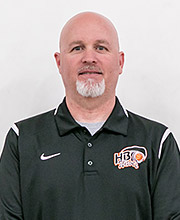 Russell McClurg began his coaching career in 1991, coaching at Huntington Beach High School as a girls JV and Varsity assistant.

After four years, he moved on to assume a head coaching position at Calvary Chapel High School in Costa Mesa, where he quickly turned the program into one of the top Division IV schools in the state. While at Calvary Chapel, Russell led the Lady Eagles to two league championships, three CIF-SS Finals appearances and one CIF-State Finals appearance (winning the 1999 CIF-SS Division IV Championship and finishing as the CIF-State runner-up).

For the past 15 years, Russell has been the girls head Varsity coach at Huntington Beach High School, where he has guided the Lady Oilers to more than 300 victories, 4 league championships, 2 CIF-SS Finals appearances and 2 CIF-State Quarterfinals appearances.

In 1993, Russell started the HB Lightning AAU girls basketball program, which competed at the highest level for several years.

In 2000, he became the Girls Youth Stars Director for National Junior Basketball. During his tenure there, he coached four D1 AAU National Championship teams, making him the only coach in Orange County to accomplish that feat.

In 2008, Coach McClurg left NJB to found HB Waves, where he is currently focused on developing young basketball players in the local community. 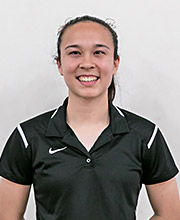 Samantha Gray was a four-year varsity letterman at Huntington Beach High School, where she was also a team captain during both her junior and senior years. Some of her honors as a player there include three-time First Team All-Sunset League, three-time Sunset League All-Academic Team, three-time Scholar Athlete, two-time Coach’s Award recipient, and three-time All Nikkei awardee. Additionally, she was awarded Most Inspirational Athlete during her senior year at HBHS.

After sitting out her freshman year due to an ACL injury, she helped her team capture an undefeated Sunset League championship and advance to the CIF-SS Semifinal game during her sophomore year.

Growing up, she played for the HB Waves club program from 6th grade through high school. She has also played for HB Next Level, OCBC, California Storm, OC Jazz, and CBS Elite. She is currently a second year student at OCC and will be transferring in the fall to either CSULB or CSUF as a kinesiology major. During the 2017-2018 season, she coached the Junior Varsity girls’ basketball team at HBHS and finished 2nd place in Sunset League with a 15-5 overall record. 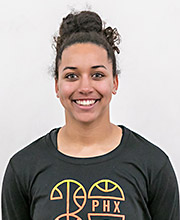 Frankie Wade-Sanchez was a four-year varsity starter at Huntington Beach High School. Her accomplishments there include CIF Player of the Year, Sunset League MVP, three-time team MVP, four-time First Team All-Sunset League, and two-year team captain. She also received Female Athlete of the Year as a senior at HBHS.

During her senior season, she played in the CIF-SS Championship game. She has played for multiple club teams, including HB Waves, Swish, OC Rhythm, and OC Elite. After high school, she was offered a scholarship to play at Concordia University in Irvine, where she is currently redshirting with a torn ACL and is expected to play again within a few months. Last year, she coached for the HB Waves High School team and is looking forward to coaching again this club season! 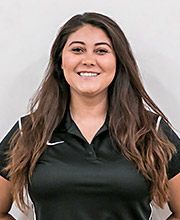 Ashleigh Wood has just finished her third year as an assistant Varsity coach at Huntington Beach High School. During the 2016-2017 season, she helped coach the team to a Sunset League championship and to the CIF championship game. She began her coaching career in 2009 at HBHS when she coached the Frosh/Soph and Junior Varsity teams. She will be going into her eighth coaching season this fall. This will also be her third year coaching for the HB Waves organization.

Asleigh graduated from HBHS in 2008 where she was a part of the basketball program for four years. Off the court, she works for YMCA and the Ocean View School District where she assists children with special needs. Without a doubt, her love for working with kids has carried over onto the court.